When you register for training with TrainUp.com, you are also supporting local education. Find out how. 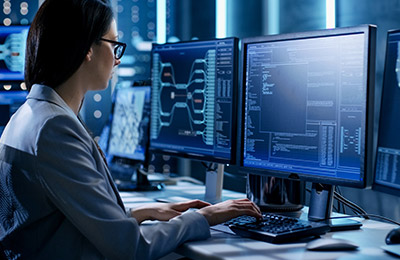 This four-day course is designed to provide a sound introduction to the .NET Framework for programmers who already know the C# language and the fundamentals of Windows Forms. It is current to Visual Studio 2019, which now includes support for cross-platform development using .NET Core. The course focuses on core portions of the .NET Framework that are common across many application areas. Separate courses are available in specific areas, such as ADO.NET, XML Programming, Windows Presentation Framework, Windows Communications Framework, and ASP.NET.

The course starts with an introduction to the architecture and key concepts of .NET. It then discusses class libraries, assemblies, versioning, configuration, and deployment, which constitute a major advance in the simplicity and robustness of deploying Windows applications, ending the notorious “DLL hell.” You learn important topics in the .NET programming model, including metadata, reflection, I/O, and serialization as well as the .NET programming model, covering memory management, asynchronous programming and application domains. Finally, you learn about threading, which includes an introduction to the Task Parallel Library (TPL).

.NET Security, which was simplified in .NET 4.0, is introduced, including both code access security and role-based security. The interoperability of .NET with COM and with Win32 applications is discussed as well as an introduction to database programming using ADO.NET and LINQ. Finally, the .NET Framework diagnostic facilities are discussed in depth.

The course is practical, with many examples and a case study. The goal is to equip you to begin building significant applications using the .NET Framework.

Have a group to train? Request On-Site training today to bring this training to your office. We bring our expert training partners to you!

When you register for training with TrainUp.com, you are also supporting local education. Find out how.

Have a group to train? Request On-Site training today to bring this training to your office. We bring our expert training partners to you!

Join The 50,000+ Companies That Have Purchased Training from TrainUp.com

Get the latest industry news, recommended courses, & promotions from TrainUp.com sent straight to your inbox.

By accessing and using this Website you are accepting the Terms. This site uses cookies. We will never sell or rent your information. By signing up for a free TrainUp.com account, submitting a contact us request, on-site training request or registering for a training course you will receive emails in relationship to your content registration and monthly updates. You will only receive emails from TrainUp.com and never a third-party source.

By signing up for a free TrainUp.com account you will be asked to provide basic information about yourself and company, If you wish to purchase any product or service made available through the Website, you may be asked to supply certain additional information relevant to your purchase.

The Website may employ the use of third-party services to allow access to course contents or registration services. By submitting your information, you grant us the right to provide the information to these third parties as needed to support your use of the Website.

You acknowledge and agree that TrainUp.com shall not be responsible or liable, directly or indirectly, for any damage or loss caused or alleged to be caused by or in connection with use of or reliance on any such content, goods or services available on or through any such third party web sites or Website.

We may terminate or suspend your account and bar access to the Website immediately, without prior notice or liability, under our sole discretion, for any reason whatsoever and without limitation, including but not limited to non-payment or a breach of the Terms. If you wish to terminate your account, you may simply discontinue using the Website.